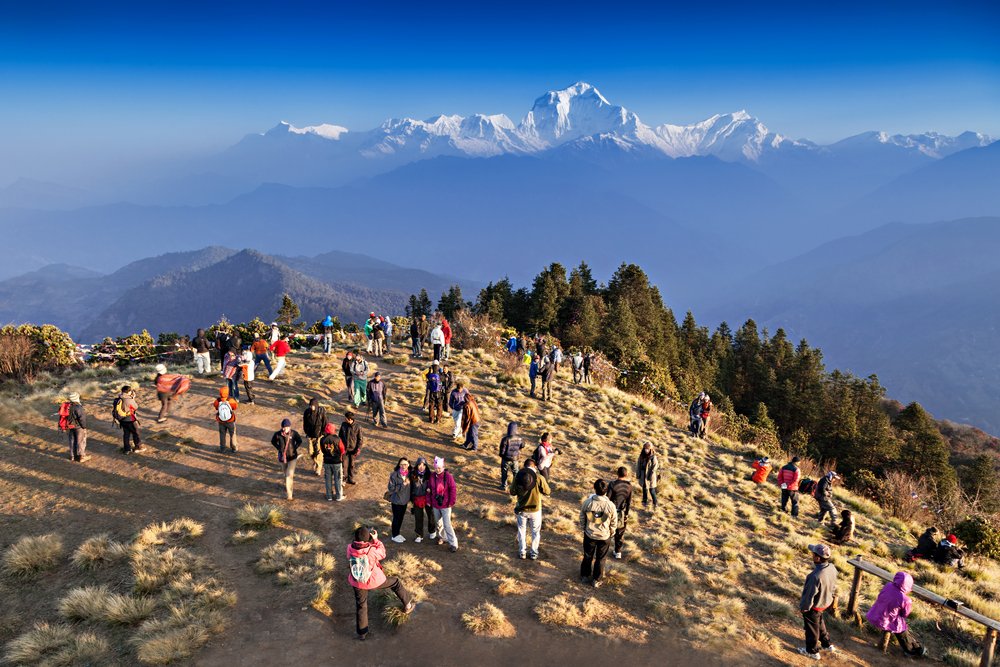 Ghorepani Poon Hill Trekking in Nepal one of the most adventurous place to travel. Like any other trip in the Annapurna region, our trek also begins in Pokhara, widely known as the ‘Lake City’ and passes through cascading waterfalls, beautiful villages, terraced farmlands, lush rhododendron forests, and amazing mountain vistas.Your safety is of paramount concern while traveling with us. Mt. Annapurna (8091 m) is the 10th highest mountain in the world and the journey to its base camp is believed to be one of the most popular treks on earth. Please note that your leader has the authority to amend or cancel any part of the itinerary if it is deemed necessary due to safety concerns. Travel Insurance:It is a condition upon joining any of Trek trips that all clients be insured for comprehensive expenses that might incur due to medical issues or accidents (this includes air ambulance, helicopter rescue, and treatment costs).

Ghorepani is the one of the most beautiful villages in Nepal. It lies in the Myagdi district of northern central Nepal. Ghorepani village lies within the Annapurna Conservation Area and the Area is 2855 meters from the sea level.

Poon hill trekking is a short journey where you can explore natural and cultural view with panoramic views of Annapurna, Dhaulagiri and Manaslu along with other mountains. It is easy route in the Annapurna Sanctuary, a great route to walk for travelers.

Upon arrival at the Tribhuvan International Airport in Kathmandu, company representative will be on standby with our vehicle & a sign-board plaque displaying our your name & company’s name at the Airport to pick you up and transfer you to your Hotel. After you’ve freshen up, a senior executive from the office will give you a short briefing about your whole program. Get familiar with your surroundings, rest or take a short stroll down the road. Your first overnight at your hotel in the valley of the gods.
Overnight at hotel in Kathmandu.

After breakfast in hotel,Half day sightseeing:

Swayambhunath is an ancient religious complex atop a hill in the Kathmandu Valley, west of Kathmandu city. It is also known as the Monkey Temple as there are holy monkeys living in the north-west parts of the temple.Swayambhunath occupies a central position, it is probably the most sacred among Buddhist pilgrimage sites. The Swayambhunath complex consists of a stupa, a variety of shrines and temples, some dating back to the Licchavi period. Although the site is considered Buddhist, the place is revered by both Buddhists and Hindus. Numerous king Hindu followers are known to have paid their homage to the temple, including Pratap Malla, the powerful king of Kathmandu.

Boudhanath Stupa (or Bodnath Stupa) is the largest stupa in Nepal and the holiest Tibetan Buddhist temple outside Tibet. It is the center of Tibetan culture in Kathmandu and rich in Buddhist symbolism. The stupa is located in the town of Boudha, on the eastern outskirts of Kathmandu. The stupa consists of a dome at the base, above which is a cubical structure painted with eyes of Buddha looking in all four directions with the word “unity” in the main Nepali dialect between them. There are pentagonal Toran present above each of the four sides with statues engraved in them. Behind and above the torana there are thirteen tiers. Above all the tiers there is a small space above which the Gajur is present. The stupa has many artifacts inside it.

Pashupatinath Temple, with its astonishing architectural beauty, stands as a symbol of faith, religion, culture and tradition. Regarded as the most sacred temple of Hindu Lord Shiva in the world, Pashupatinath Temple’s existence dates back to 400 A.D. The richly-ornamented pagoda houses the sacred linga or phallic symbol of Lord Shiva. Thousands of pilgrims from all over the world come to pay homage to this temple, that is also known as ‘The Temple of Living Beings’.

Kathmandu Durbar Square or Hanumandhoka Durbar Square is the plaza in front of the old royal palace of the Kathmandu Kingdom. It is one of three Durbar (royal palace) Squares in the Kathmandu Valley in Nepal, all of which are UNESCO World Heritage Sites .  Hanuman Dhoka (Hanuman Gate), with several complexes spread over an area of about five acres, is the social, religious and urban focal point of Kathmandu. The square is the complex of palaces, courtyards and temples that were built between the 12th and the 18th centuries by the ancient Malla Kings of Nepal. The Durbar is divided into two courtyards, the outer comprising Kasthamandap, Kumari Ghar, and Shiva-Parvati Temple, and the inner consisting of Hanuman Dhoka and the main palace. It also houses two museums. Important ceremonies, including the coronation of the Nepali monarch, are held in the Kathmandu Durbar Square.

Depart from Kathmandu to Pokhara. (Drive/Fly)
Passing through beautiful landscape, paddy farm, river, tiny villages etc. Pokhara is located 200 kilometer west of Kathmandu city .This is second largest city of Nepal. It is a most beautiful city with lakes and panoramic view of Annapurna Himalayan ranges. The Annapurnas and the famous “Fishtail” mountain peak of Machapuchare can be seen from Pokhara valley.

Pokhara:   Arrival
Pokhara is blessed with stunning panoramic views of the Annapurna range which forms its backdrop. The mesmerizing Machhapuchhre also called Mt. Fishtail dominates the scenery because of its proximity to the valley and can be seen from anywhere in Pokhara. Stretching from east to west, the Annapurna massif includes Annapurna 1 to IV and Annapurna South. Further away are seen the giants, Dhaulagiri (8,167m) and Manaslu (8,163m).

Overnight at hotel in Pokhara.

After breakfast our trekking guide will give you all info and 45 minute drive to Nayapul and commence our trek to Birethanti, a large and prosperous town beside the Modi River. We head up the main trail to Sudami where we climb gradually up the side of the valley, reaching Hille (1495 m) before pushing on to Tikhedhunga and we climb high hill to Ulleri and best view Annapurna south (7219 m) and Hiunchuli (6441 m).

5/6 hour After breakfast we prepare for the long uphill and start with steeply ascends on the long stone steps to Ulleri (1950m) village with the amazing landscape and the Himalayan scenery. We spend a pleasant day’s trekking through rhododendron and oak forests. The scenery gives you inner power to climb up these steps and immerse you to walk more. After few hours of walking with several breaks in between reaching at Ghorepani, we can enjoy the fantastic best views of Dhaulagiri, Annapurna, Himal Chuli or Nepal Himalayan range.

An early morning start for 50 minutes hike up to Poon hill (3210m), the route offers the glimpse of the pleasant rhododendron forest. This brilliant viewpoint provides us an unobstructed sunrise over the high Himalayan and the wide range of panoramic scenery from the far western Himalaya of Dolpo, Mt. Dhaulagiri, and Annapurna including Dhaulagiri, Annapurna, Himal Chuli, Mt. Machhapuchre (Fish Tail) and all the way to Manasalu. After a great time return back to Ghorepani for breakfast and continue trek to Tadapani for overnight tea house hotel.

Trail desceds steepl through dense damp forest, where you may see monkeys, and continues down over a series of rock cut steps that follow leaping stream. Arrive in ghandruk  and explore the maze like streets of this thriving Gurung settement etc.

Day  08: Trek back from Ghandruk to Nayapul and pokhara ending the Trek

A steady climbing down past startling green cultivated land and picturesque, beautifully preserved farms to the scurrying Modi River, which the trail follow back to Birenthanti and Nyapul. Drive back to pokhara. Transfer to the hotel.

Day 09: Drive/Fly  back to Kathmandu

After fantastic time in and around Pokhara, today after breakfast you will transfer to the tourist bus station for day scenic countryside drive to Kathmandu. Stay overnight at the hotel.
Note: You can fly to Pokhara which takes 35 minute.

Overnight at hotel in Kathmandu.

After breakfast, transfer to airport for final departure.