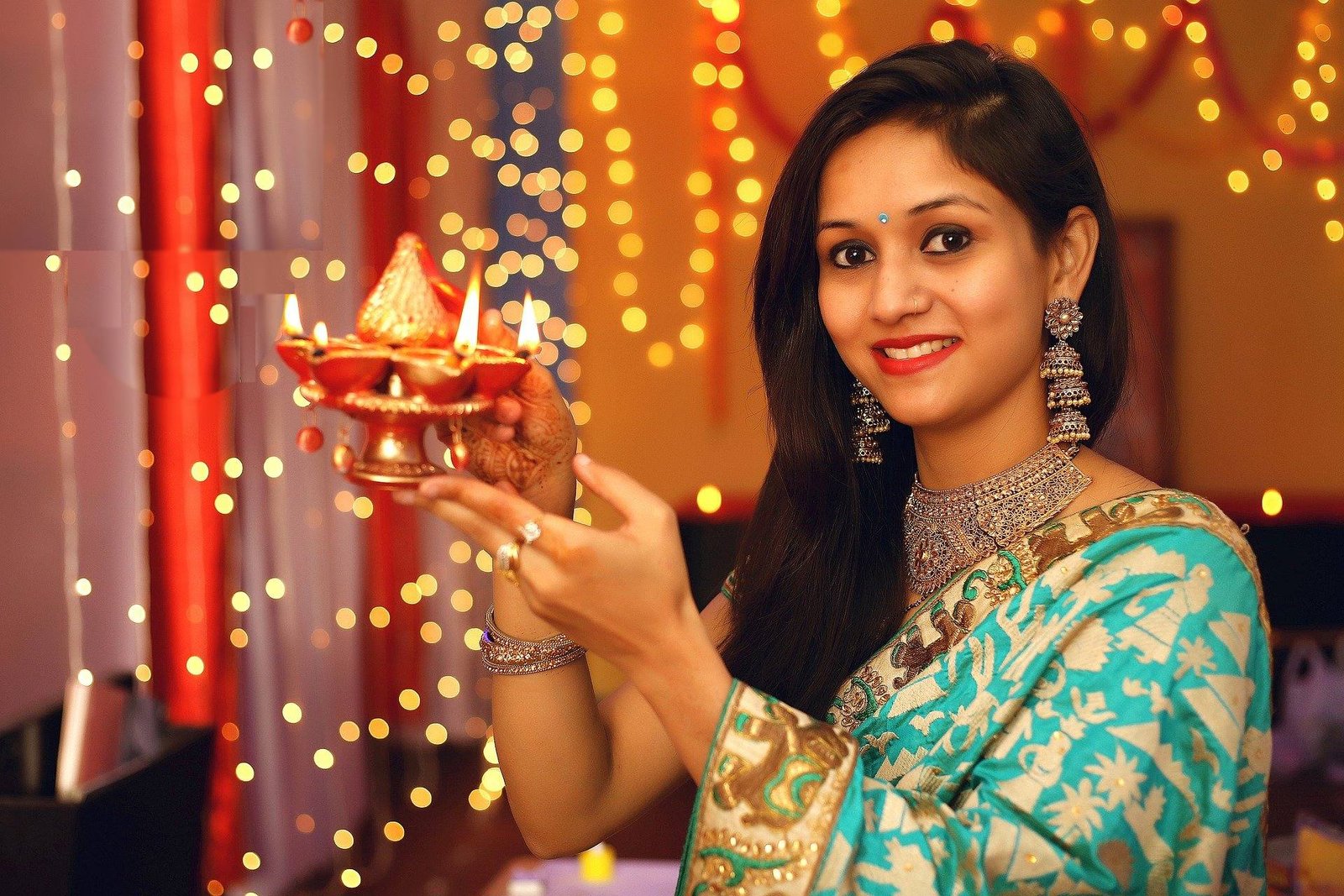 The festival of lights, Tihar (Devanagari: तिहार) is also popular as Yamapanchak (Yama means the god of death and Panchak means five), Deepawali or Swanti(स्वन्ती:) in Newa language. This is the second biggest Nepali festival after Dashain, celebrated by Hindus for 5 days few weeks after celebrating Dashain during the month of Kartik (October or November). It is also known as Yama-panchak where people honors Yama, the God of Death. Godess of wealth Laxmi is also worshipped during the day of Laxmi puja. Though it is celebrated by all Hindus but various communities celebrate Tihar in different ways. Tihar is celebrated in India as well and it is known as Diwali in India but with some significant differences.

The 5 days of Tihar

The festival shows respect not only to the gods but also to animals like crow, cow, oxen and dog. The 5 days of Tihar are Kaag Tihar (Day 1), Kukur Tihar (Day 2), Gai Tihar and Lakshmi Puja (Day 3), Govardhan Puja (Day 4) and Bhai Tika (Day 5).

In Nepal Tihar begins with Kaag Tihar on Trayodashi of Kartik Krishna Paksha (the 13th day of the waning moon), is the day of the crow and this day crow is worshipped. Kaag Tihar is known as KWO PUJA in Newa language. Crow is know as informant of Yama. Crow is worshipped by offering rice, sweets etc on the roof of the house. It is believed in Nepali society that the cawing of the crow is believed to be the prediction of hearing some bad news. Some people also says if a crow hits one’s head with their wings then it is considered as a misforutne or something bad to happen in coming days.

On the second day is Kukur Tihar and it is known as KHICHA PUJA by Newars of Nepal. On this day dog is offered prayers, put Tika on dog’s forehead, calendula garlands and food in the morning as the agents of Yama, honors for their loyalty.

DAY 03: Third day of Tihar is Gai Tihar and Laxmi Puja (cow and goddess of wealth)

Gai Tihar and Laxmi Puja is on the third day of Tihar, the day also belongs to the cow that represents Laxmi. Cow is prayed in this day as “Gau mata”. Cow is considered as mother (mata) by Hindus and it is strictly prohibited to kill cow in Nepal. If anyone does that then he/she will be taken action legally. Cow is offered prayers with calendula garlands in the morning and Goddess Laxmi is worshipped in the evening.

People clean their house, office, shops and surroundings during the day and in the evening decorated with lights such as candles, diyo (oil-wick lamps), electric lights to welcome the Goddess of Wealth. People make a path of footprints of Goddess Laxmi leading into the house. During this day, windows and doors are decorated with Marigold flowers. There will be lit up with extra lights inside and outside of the house in the evening. Diyo is kept on the doors, windows and stairs with the hope that the Goddess enters into the house. On this day, you can get beautiful view of brightly lit-up Kathmandu city on streets, roof-top or from hills near Kathmandu such as Swayambhu, Tarkeshwor etc. Laxmi Puja is a speacial festival for all because everyone’s life is deeply connected with wealth.

In the evening, a group of girls visit each house in the local community and play Bhailo. It is a tradition girls to go from house to house singing Tihar songs. Girls will give blessings and the residents of the house give selroti, sweets, money and other foodstuff in return. The girls share foodstuff and money received from people among themselves.

The fourth day is for the draught animal, oxen. People of some community use cow dung to make goverdan mountains and Govardhan Puja is performed by worshipping it. During this day the Newa community of Nepal especially in Kathmandu valley performs Mha Puja. This is dedicated to oneself, Mha means body and Puja means worship. Newa people worship their own body for good health. It is the day beginning of the Nepal Sambat Calendar. Nepal Sambat is the national lunar calendar of Nepal.

At night/evening, group of boys gather together to play Deusi, visits each house in the local community similar as the girls do during Bhailo.

Once upon a time, there was a sister and brother living happily. Sister loved her brother a lot and one day, the sister had completed all her morning household like sweping floor, praying god and cooking food. Breakfast was ready but today her brother had not woken up yet.

She started calling him from kitchen but her brother didn’t came down. She wondered why her brother haven’t woken up yet.
Then she went to her brother’s room and saw that her brother was sick. She did Jaki Holi so that he might feel well. In Newa community Jaki Holi is a ritual with rice, people take a handful of rice to help eliminate bad spirits from one’s body. She did everything she could to make her brother helthy again but his health was not getting any better.

After few moments she was shocked to see the Yamaraj (Lord of Death) in her brother’s room. Yamaraj was there to take away her brother’s soul. It is believed that whem someone dies people say Yamaraj took away. She refused to send her brother with Yamaraj and begged for his life but Yamaraj said I must take him. Lord of Death said it is the law of nature, people are born to die and no one is immortal.

Now there is no way to save his brother. She wipes away her tears as an idea came into her mina and asks for one last thing to the Lord of Death. She asks to do a ritual (puja) before sending his brother with Yamaraj but he says there is not much time left so he could not let her perform any rituals. Sister promises that it won’t take long and she will do as qucik as possible. After getting permission fom Yamaraj she start to perform rituals and requests the Lord of Death to be a part of this ritual. Yamaraj accepts it and the sister starts managing all necessary things for ritual.

She started making mandala on the floor with inside a circle marked with water. A small circle is drawn with mustard oil at the center of the mandala then it is surrounded with rice, unhusked rice, black beans, black lentil and puffed rice.
After making mandala puja begins, she asked to sit Yamaraj first and then his own brother.

Firstly, she worshipped Yamaraj and next to her brother. She said “I am drawing a mystical border through this water, so that no harm may come your way. Until this oil dries off from the ground, this black beans grow, until this garland that I am putting on you dries off may nothing happen to you. After puja there is ritual of giving sagun with egg, small fish and alcohol for goodluck. She gave sagun to both of them and at the time of giving sagun, she cleaverly puts little salt on the boiled egg and gaves sagun to Yamaraj. Yamaraj takes sagun and after eating egg he finds that there was salt on them. Yamaraj stands up and shouts at her that the she made him eat salt. Sister says that the ritual is not completed yet and cannot leave before it’s done. She requests him take a seat. Yamaraj sat dowm thinking now he will have to repay the gratitude of this salt. Till today it is trongly believed in rural parts of Nepal that they will have to repay the gratitude of the salt.

Now, they are at the end of the ritual and it’s time to take his brother away but the sister cries saying please don’t take my brother away. Yamaraj says I have eaten your salt and I’m impressed by your attempt so I will not take him today. From that day people started celebrating Bhai Tika every year.

In Treta yug, there was a King Bali was Lakshmi-Narayan’s devotee, who attained the same power and lifespan as Indra(king of heaven). He was given a boon from Brahma and unlike other demons, he didn’t conqured heaven but he ruled the world with the belief that good governance could make it a better place than heaven. He had taken an oath to alleviate poverty and his kingdom became so prosperous during his rule. After seeing this other kingdoms also wished to be ruled by him.

After his success his heart began to fall into pride, thought he is the greatest. He thought there is no one greather than him and believed worship of gods to be an insult to him. Now he began to think he deserved to be the ruler of heaven and no other deservs to be king of heaven except himself. King Bali’s pride took him to invaded heaven and conquered it as other demons did in the past. He became the king of Heaven and thought to perform Ashwamedha Yagya to show his power to the world. Ashwamedha Yagya is done to ensure his lasting dominion. He had control over the three worlds Heaven, Earth and Underworld (Patal).

He was performing Ashwamedha Yagya, Guru Shukracharya had told King Bali not to stand up and go elsewhere before completing the ritual. During Yagya, a monk came to the ritual site and began to beg. King Bali was full of pride. He thought a monk skhould not be kept waiting by a great charitable person like him. He disobeyed Guru Shukracharya and stood up inbetween Ashwamedha Yagya. He told the monk to ask anything he wished to have and the monk asked for only three steps of land. King Bali was surprised to hear this and laughed and reminded the monk about his position. He told he has conquered the three worlds and he is the Lord of Heaven, Earth and Underworld (Patal). King suggested the monk to ask for a valuable thing but the monk refused. The monk refused to ask other valuable wish and said if he could give then three steps of land would be more than enough.

King Bali give his word and as soon as King Bali promised, the body of the monk started to grow big. The became so large that his two feets measured the whole universe and now there was no place left to keep his third feet and
the king bowed down to put the third foot on his head. Lord Vishnu in the form of a monk placed the last foot on the King Bali’s head. King Bali got shocked and now he realized that the Lord Vishnu came in form of a monk to break the pride as he was a devotee Vishnu.

Lord Vishnu was pleased by the king Bali’s devotion and sent him to rule the Underworld but the lord understood King’s love for earth. Because of the King’s love towards earth Lord Vishnu allowed him to come back every year to rule the earth for 5 days. During the Tihar festival people gather in groups and go door to door, announcing the arrival of King Bali saying “Hami tesai ayaenau Bali raja le pathako”.