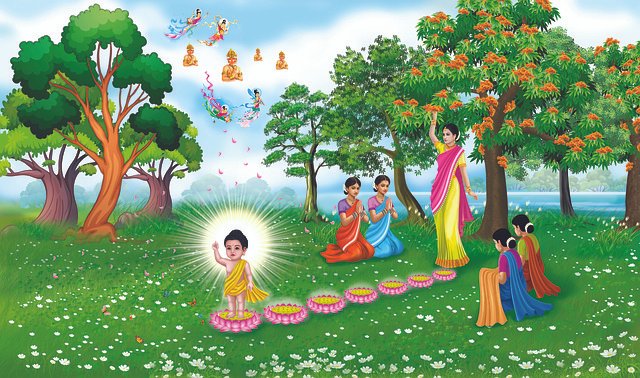 The name Buddha means “one who is awakened” or “the enlightened one.” Buddha is known by many names such as Gautam Buddha, Siddhartha Gautam, Buddha Shakyamuni. His birth name was Prince Siddhartha Gautama. He was a spiritual teacher during the 6th century B.C and his teachings serve as the foundation of the Buddhist religion.

Buddha was born in around 623 B.C. in Lumbini, the southern region of Nepal. It is in Rupandehi district, Lumbini zone (Province No. 5) of Nepal. His birth date is based on the Asian lunisolar calendar which is quoted as Baishakha Purnima (full moon day in the month of Baishakha between APR-MAY). He was born into a royal family belonging to the Shakya clan. His father is Shakya King Suddhodhana and mother Queen Mayadevi. He was born when her mother Queen Mayadevi was going to her parent’s Kingdom Nawalparasi and in midway, she stopped in Lumbini where she gave birth to Prince Siddhartha Gautama. She gave birth holding on a branch of a Bodhi tree. At the age of 13, he was married to Yasodhara. At the age of 29, he left his wife, son, his kingdom and moved from place to place in search of salvation. He laid stress on four novel truths which are there is sorrow in life, there is a cause of this sorrow, the cause is desire, if desire is removed, sorrow can also be removed.