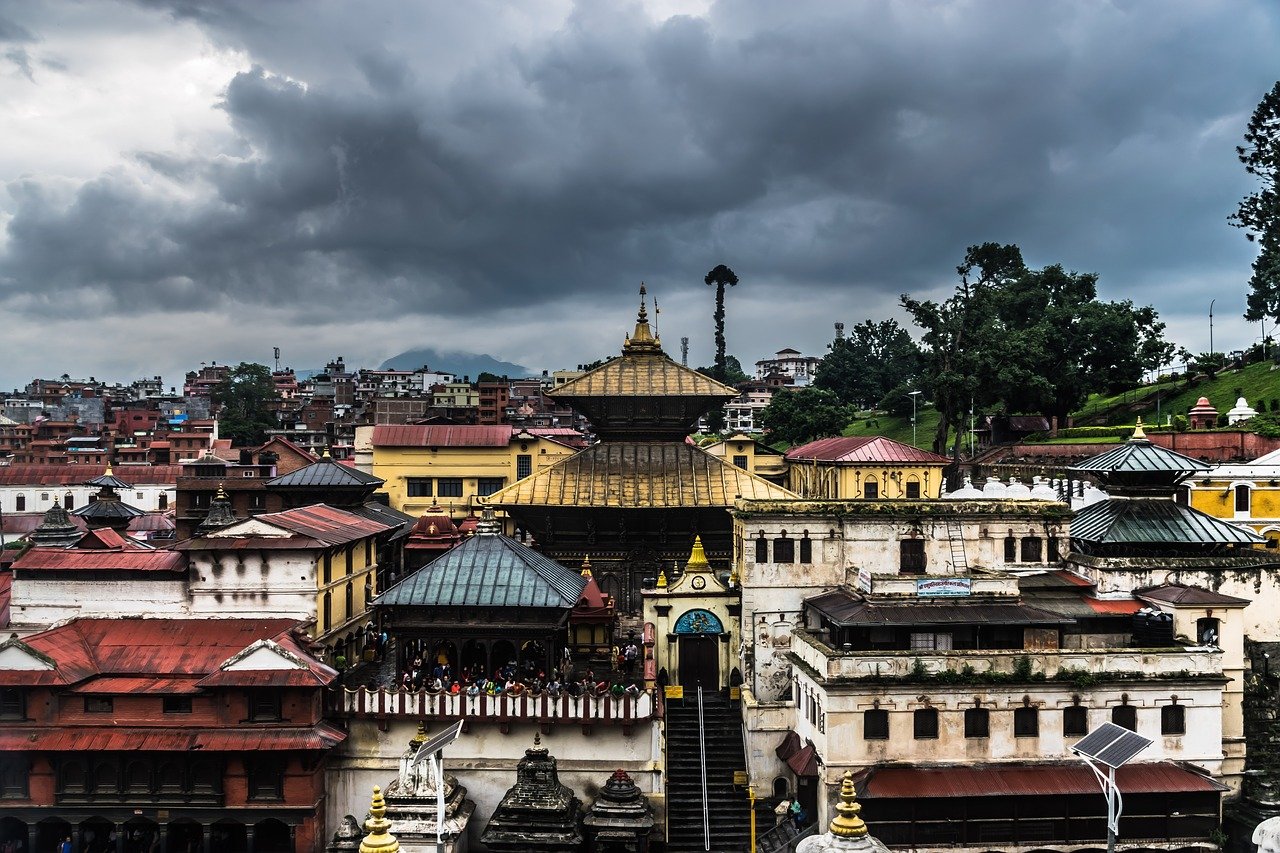 In 1979, Pashupatinath temple was listed as a UNESCO World Heritage Site. One of the holiest Hindu shrines, Pashupati (Sanskrit: पशुपति Paśupati) Temple is located in Kathmandu, Nepal on the banks of the Bagmati River. This temple is dedicated to Lord Shiva or Shankar. He has 1008 names, among them Pashupati is very famous one. Pashupati is a pilgrimage place for Hindus and the main area of the temple is only accessible for Hindus. The word Pashupatinath is derived from Sanskrit words: “pashu” means animal, “pati” means protector, and “nath” means Lord. Therefore, Pashupatinath means “Protector and Lord of all animals”. In Pashupati temple Lord Shiva is worshipped and he is the God of destruction. Unlike other sites Pashupatinath is center of energy with active participation of people all times of the day, every day.

The Pashupatinath Temple stands at the middle of the courtyard. The courtyard is full of small Shiva lingams which are 64 in total and in the center of the courtyard there is Kotilingeshvar. The inner courtyard has temples of Vasuki Nath temple, Surya Narayan Temple, Unmatta Bhairav Temple, Kritimukha Bhairav shrine, Hanuman, Budhanilakantha shrine etc. There four doors in then temple such as the southern gateway, eastern stairway from the Arya Ghat and western gate. The doors are silver and gilt-plated. It is heavily decorated with images of deities. The Nandi (bull of Shiva, bull is the vehicle of Shiva) was originally constructed in stone and is visible from the main entrance. It was originally constructed in stone and later covered in gilt copper by princess Vikramadevi. Near the Nandi there is Hanuman, in red cloth. At the northeast of the courtyard there is the Temple of Vasuki. He is one of the naga (snake) kings.

Thousands of devotees from within and outside the country come to Pashupatinath every day as well as on special occasions like Ekadasi, Sankranti, Mahashivratri, Teej Akshaya, Rakshabandhan, Grahana (eclipse), Poornima (Full moon day) etc.

The Pashupatinath Mandir was built in the 3rd Century BC during the time of Somadeva dynasty. The gilt roof was added in 1297 AD and the lingam was replaced in 1360. In 1754, the temple was renovated by King Bhupalendra Malla. The Pashupatinath temple is built in a pagoda style temple with a golden spire. It is a masterpiece of Hindu architecture. The main temple was left untouched by the massive 7.8 magnitude earthquake in 2015 AD.

There are many stories involving the origins of Pashupatinath and it is said that Lord Shiva came to the Kathmandu Valley and rested at side of Bagmati river while on a journey. Shiva was so impressed by beauty of surrounding forest that he changed themselves into deers and walked into the forest. When Loard Shiva leave this place then he announced that, since he had lived by the Bagmati in a deer’s form, he would now be known as Pashupatinath, Lord of all Animals. Thus, Pashupati temple area is regarded as one of the most important places of pilgrimages for the followers of Hinduism.

The priests of the Pashupati Temple are also known as Bhattas and the chief priest is known as Mool Bhatt. They are Brahmans from South India.

There is a chaturmukha Shiva linga inside the main temple of Pashupati.

Behind Mrighastali and towards the Gujeshwari there is place named Bankali which is the graveyard for a number of Nepali ethnic groups.

Mrigasthali is the place where Shiva once lived in the form of a deer.

The Gorakhnath temple is an important 11th century red and white temple dedicated to the founder of the Shaivite monastic tradition.

Guhyeshwari temple is located at east of side and is dedicated to Goddess Sati.

Gauri Ghat is where the Bagmati river enters the Pashupati.

Akchhaya Tritiya is a festival celebrated during Baisakh (April-May). It is celebrated to honour the wedding of Shiva and Parvati which occurs on the 3rd day of the waxing moon in Baisakh.

Each February, tens of thousands of people come to the Kathmandu during the Maha Shivaratri festival which is also known as “The night of Lord Shiva”.

After crossing the Bagmati river via a small bridge and climb up to the hilltop. You will have a beautiful panoramic view of the main Pashupatinath temple. If you’re not a Hindu then this is the best way to see the temple closely.

In Pashupati there is Nepal’s oldest statue.

How to reach Pashupatinath ?

You can reach Pashupatinath from Ratnapark or Jamal in Kathmandu. There you’ll get a local bus, micro-bus or a temp to Gaushala. Cost from Ratnapart to Gaushala/Pashupati will be less than US$ 0.4. You can also take a taxi. For taxi there are two options one is take a taxi from a taxi stand and another is download app “Pathao”. It is just like Uber in USA. If you travel via Pathao then there will be no chances that you’ll be overcharged.

How to say Pashupatinath ?

How to reach Pashupatinath temple from Gorakhpur ?

From Gorakhpur you can enter Nepal via Nichlaul in India and then Chitwan in Nepal to Kathmandu. There is another route also which is Gorakhpur to Kushinagar then to Sugauli and then entering Nepal via Birgunj, Hetauda and then to Kathmandu. By road it may take upto 10 hours and the distance is 333 kilometeres approximately.

How to reach Pashupatinath temple Nepal from Delhi ?

From Delhi you can take direct flight which will take you around 1 hour and 30 minutes to reach Tribhuwan international airport, Kathmandu. By road you can travel via Agra, Gorakhpur and Kathmandu. By bus it may take upto 24 hours to reach Pashupatinath and the distance is approximately 1128 kilometers.

How to reach Pashupatinath temple by train ?

There is no train to reach to Kathmandu till today so it is not possible to reach Pashupatinath temple by train.

Yes, Pashupatinath temple is a world heritage site declared by UNESCO in 1979.

It is open for Hindu tourist only but the area is very large, non-Hindus will have other interesting things to observe except the main inner courtyard and Pashupatinath temple. There are around twelve 12 Jyotirlingas (phallic shrines), 492 temples etc. Hindu tourists from India and other countries are allowed to enter into the temple. Other tourists can view from crossing the Bagmati river.

Pashupatinath Temple darshan timings are from 4 am, West gate opens for visitors. According to Hindus the best time to visit any temple is at morning before having breakfast to even without having a cup of tea.

Pashupatinath Temple Aarti timings are in the evening from 6-7:30 pm.

Where is Pashupatinath temple located in map of Nepal ?