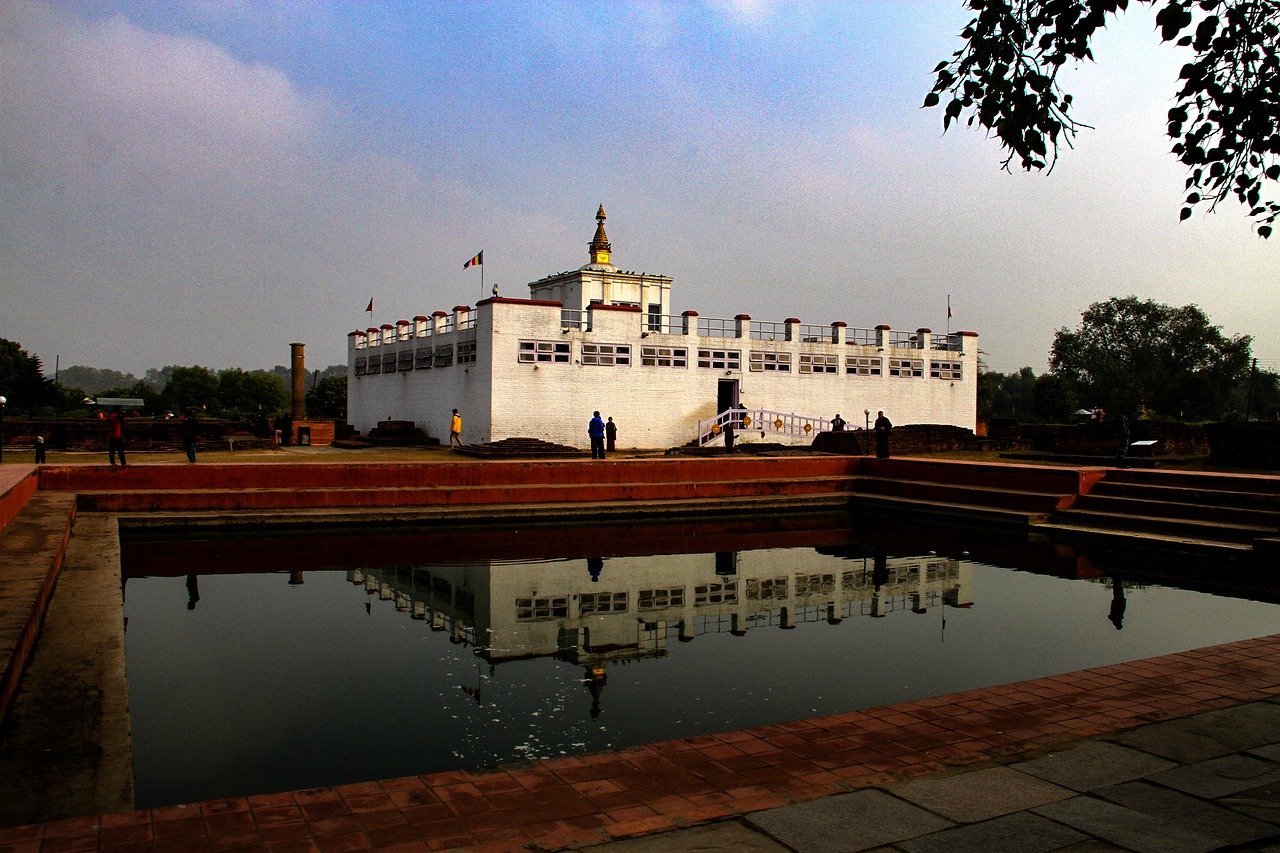 Lumbini is the birth place of Lord Buddha the Shakya prince and ultimate Buddha. It has been declared as a World Heritage Site by the UNESCO. It is small town in the southern Terai plains of Nepal, where the ruins of the old city can still be seen. At the age of 84, Lord Buddha left this world with thousands of followers to keep Buddhism alive. Lumbini has since been a holy ground for Buddhists all over the world. The restored garden and surroundings of Lumbini have the remains of many of the ancient Stupas and Monasteries. A large stone pillar erected by the Indian Emperor Ashoka in 250 BC bears an inscription about the birth of the Buddha.

Lumbini Garden, PagodaThe most important attraction of Lumbini is the holy temple of Maya Devi. The temple has a stone sculpture of Maya Devi in labor pain. In the temple of Maya Devi there is a stone image of Maya Devi giving birth to Lord Buddha as she holds onto a branch of tree. The temple is very popular among the women having some or other fertility problem. One cannot miss the heart-rending cries of such women as they pray for an off-spring at this place. To the south of the temple, there is a pond where Queen Maya Devi is said to have bath and given birth to her son his first purification bath that is compulsory in Hinduism. An important archaeological site near Lumbini, Kapilvastu evokes the ancient palace where Lord Buddha spent his formative years. Scattered foundations of the palace are abundant and archaeologists have by now discovered 13 successive layers of human habitation dating back to the eighth century BC. This area also houses ruins of ancient monasteries and the temple of Mayadevi – Lord Buddha’s mother. Other monuments here are the various monasteries constructed by other countries like Japan, Burma, Korea Thailand and Sri Lanka.

Kapilbastu, not far from Lumbini, was the location of the Kingdom which Gautam Buddha’s father ruled. Around here are many ruins which indicate the old forts and palaces of the time. Tilorakot, the capital of Kapilbastu where Siddhartha (Buddha) spent his days inside a palace as an apparent to the throne. It was here he came to know about the suffering of people and decided to choose the way of the Buddha.

Ashoka, an emperor from India visited Lumbini and built the Ashoka Pillar. The Ashoka Pillar has a great historical importance because the pillar is inscribed with the history of Gautam Budhha and Buddhism. The pillar is 22 feet tall and an inscription tells that it is erected in the place where Gautam Buddha was born. Though it was built in around 3rd century, it was rediscovered in 1896 by Khadga Shamsher Rana who was the governor of Palpa. The Ashoka Pillar is surrounded by a fence. Visitors offer butter lamps and prayer flag on the fence.

Myanmar Golden temple is an oldest but attractive temple in Lumbini. The temple is painted in gold and white which has 3 prayer halls inside the temple. The temple has an artistic architecture. The structure of the temple resembles the top of the ancient temples built in Pagoda style.

Another major attraction of Lumbini is the World Peace Pagoda which was built in the US $1 million by Japanese. The structure covers quite a huge area. It is painted in white and there’s a golden statue of Lord Buddha. The base of the beautiful World Peace Pagoda is said to be the grave of a Japanese monk who is believed to be killed by anti-Buddhist extremists while the monument was being built.

Lumbini is also famous for Lumbini Museum as it holds some major life events of Gautam Buddha in the form of paintings, photos and artifacts. Thousands of tourists visit the museum every year and Historians who have a keen interest in Buddhism also visit this museum.

There are three prayer halls inside the Myanmar golden temple.
One of the beautifully constructed monasteries in Lumbini is Chinese Buddhist monastery. Its impressive structure and arts attract a lot of tourists. The Chinese Buddhist Monastery was constructed in 2000 by the Buddhist Association of China. Inside the monastery, you can see halls to meditate and some humongous statues in a unique artistic position. The statues are an amazing art of work.

Tilaurakot is historical site of Kapilavastu which is about 29 km west of Lumbini. Siddhartha Gautama spent the first 29 years of his life as a prince in this place before leaving paalace. It was the capital of Kapilavastu, an ancient Sakya Kingdom in those days. Archaeological has identified the gate he left through to begin his journey to enlightenment.

Normally Tour Itinerary depends upon company to company and your choice.

Day 01: Fly or Drive to Lumbini

On the day we will visit surrounding villages of Lumbini and observe rural culture. Interaction with warm and hospital local people, buying their authentic handicraft products and observing their traditional rituals will bring one closer to understand the diversity of Terai cultures in Nepal.

Drive and visit religious and archaeological sites of Tilaurakot, Gotihawa, Kudan, Siddharthanagar, Niglihara, Sagarhawam Aurorakot. Tilaurakot is the ancient Kapilabastu – the capital of Shakya. Kudan was where Buddha was received by his father after his access to enlightenment. Gotihawa is the birth place of Krakuchanda Buddha. Niglihawa is where Kanakmuni Buddha was born. Sagarhawa is the archeological findings as “place of the Massacre of the Shakyas”.

Drive and visit religious and archeological sites at Devdaha and Ramagram. Devdaha is the ancient capital of the Koliya kingdom. It is the maternal hometown of Queen Mayadevi (mother), Prajapati Gautami (step-mother), Princess Yasodhara (consort) and where Prince Siddhartha had spent his childhood. Ramgrama is the brick mound on the bank of the Jharahi River. It is seven meter high brick stupa consisting of relic (one of the eight astha dhatu) of Lord Buddha. The Stupa was built by the king of Ramgrama, who was the eighth king to obtain the Buddha’s relics.

Day 06: Fly or drive back to Kathmandu