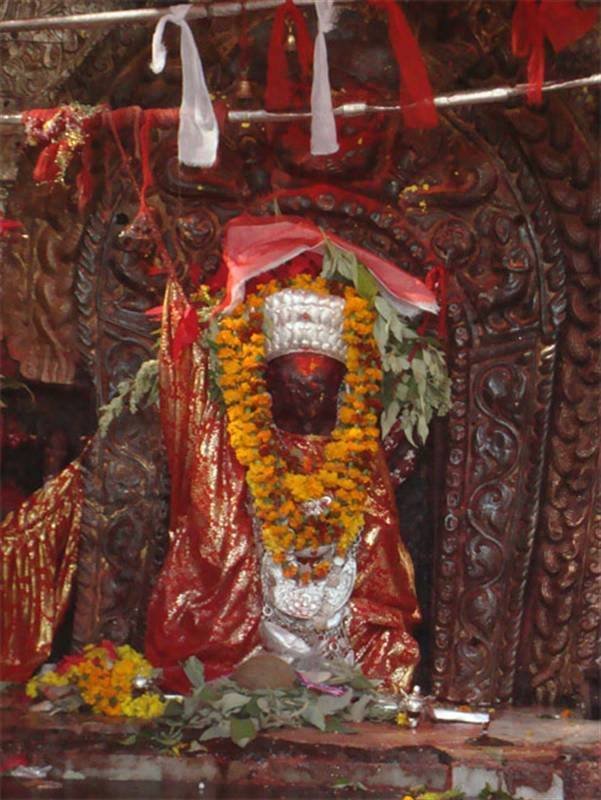 Goddess Dakshinkali is situated at a hilly place nearby Pharping located at a distance of 18 km south from Kathmandu Valley and about two kilometers south of Shekha Narayan. A 45 minute drive south from Kathmandu brings you to Dakshinkali. Dakshinkali is regarded as one of most important Hindi goddesses. This temple is recognized as a very important alters of Divine energy which brings peace and a kind of vibration once you enter the premises. The temple of the Goddess is renowned by the name of the Goddess herself in national and international areas. It is located in the Pharping Municipality. The temple is dedicated to the six-armed goddess Kali. The shrine of Dakshinkali is the most spectacular of all Kali temples. The image of Dakshinkali Goddess is enshrined in an east facing small open shrine in the middle of a courtyard. On the southern wall of the courtyard sits the images of Matrika (mother goddess). Dakshin means south and as this shrine is situated in the south cardinal point of Kathmandu valley the deity here is called Dakshinkali.

The temple is tantric in nature and is a favorite worship place of the Hindus. Specially on Saturdays several devotees visits here to worship the Goddess. Pilgrims visits this temple to offer their prayer and animal sacrifices (buffaloes, chickens, ducks, goats) to the Goddess. The animal is presented to the priest who will ritually decapitate them with a khukuri knife.

The area occupied by the temple is about 56 hectare which is full of natural beauty for the convenience of the general public, parking area, picnic spots and place to sell flowers and offerings are constructed. Tourists and devotees enjoy the surrounding atmosphere and natural beauty. You’ll see stalls selling Puja materials, trinkets and cocks, pigeons & uncastrated male goats for sacrifice on the streets and shops before you reach the main temple. You’ll find great art and architecture, blissful and serene place for blessings of the mata Kali. Main entrance of the temple is protected by brass fencing with little brass lamps fixed on it and two intricately carved brass lions were guarding the entrance of this fencing. Animals are sacrificed here and can be crowded on special days. Apparently Tuesday and Saturday are the two days when there are a lot of crowd and animal sacrifices but sacrifices happen daily. People offer animals in front of a 60 cm high Kali idol. After the sacrifice, the devotees sprinkle the animal blood on the Kali statue and after that they drag their offerings to the nearby bloody stream to wash, butcher and prepare the feast. You’ll find the temple full of worshipers. People consider the temple scare and special as wish fulfilling goddess.

Mother of the goddess Dakshinkali

There is a stone-idol located at south-west corner at a distance of about a furlong at the hill above from the temple of Goddess Dakshinkali. According to the local people, the Divine Energy of the said stone idol was very much violent and to mitigate the violence of the said idol, the stone image of the Goddess was established known as the mother of the Goddess Dakshinkali.

Situated in Dakshinkali VDC ward No.5, The Temple of Gopaleshwar was established according to Vamsavalis and Puranas during the time of Gopaleshwar. (First ruling dynasty of Nepal). He is equally honored by the Buddhist as well as one among the Astabrtaragi. Therefore he is honored by Hindu and Buddhists alike. According to the Puranas Lord Krishna had performed the scared thread ceremony of his son Pradhuamn here.

The cave of Gorakhnath having the foot mark of god Gorakhnath is a famous medieval cave. There is even an inscription of Jayasthiti Malla from Nepal Sambat 511 parsing about the cave. From here one came have a nice view of entire Pharping Township which is now felt enclosed by the Buddhist. During the annual Yatra of Dakshinkali, Chakaa Pooja is performed by Kanphatta Yogis of Gorakhnath (Yogi with Pierced ears)

Located at the foot of the hill on the western fringe of Pharping township the pagoda style temple of Bajrayogini is worth while on visiting was according to the chronicals established by the Shakyas during the reign of Pratap Malla. Bajryogini is worshipped by the Hindus in the form of Ugratara.

Dakshinkali is not only a famous pilgrimage of Nepal but also a popular picnic spot. Buses, minibuses and taxis for Dakshinkali are available at Ratna Park.