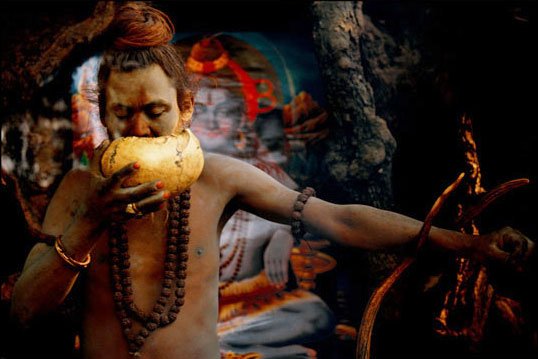 Aghor cult is a cult of Hindu religion and people who follow Aghor cult are known as aghori. Aghoris are devotees of Lord Shiva. Aghori is usually cut off from the society. They have their own world apart from the society. Aghoris are type of sadhus with uncommon rituals and ways of worship. They are simple beings or beings who live with complete simplicity.

Ahgori are known for their nature to eat anything. They eat the flesh of human as a part of their aghor pratice but he do not kill any creatures just to fill stomach. They only eat the abandoned dead bodies in the cremation grounds. The government does not punish them for this as they are not doing anything illegal. It is a test meant for Aghoris from their guru. If you can eat human flesh like a chicken with no disgust that implies you have gone beyond your senses. They consume in a bowl made out of a human skull.

Their idea behind sadhna (Aghor pratice) on cremation ground is to destroy fear of death which is the greatest fear of all living creatures on the earth. They also seek to free themselves from the bonds of greed, obsession, anger, sensual pleasure and become sadashiv. Aghori basically performs three types of practices Shiva sadhna, cremation and cremation sadhana. In Shiva sadhana, keeping the feet above the dead body and doing meditation is done. The rest of the way are similar to cremation.

The clan does not have any sort of hatred or contempt in them. A true aghor is known to be above human frailties like fear or hatred, he or she are always in devotional path of intense yogic and tantric sadhana.