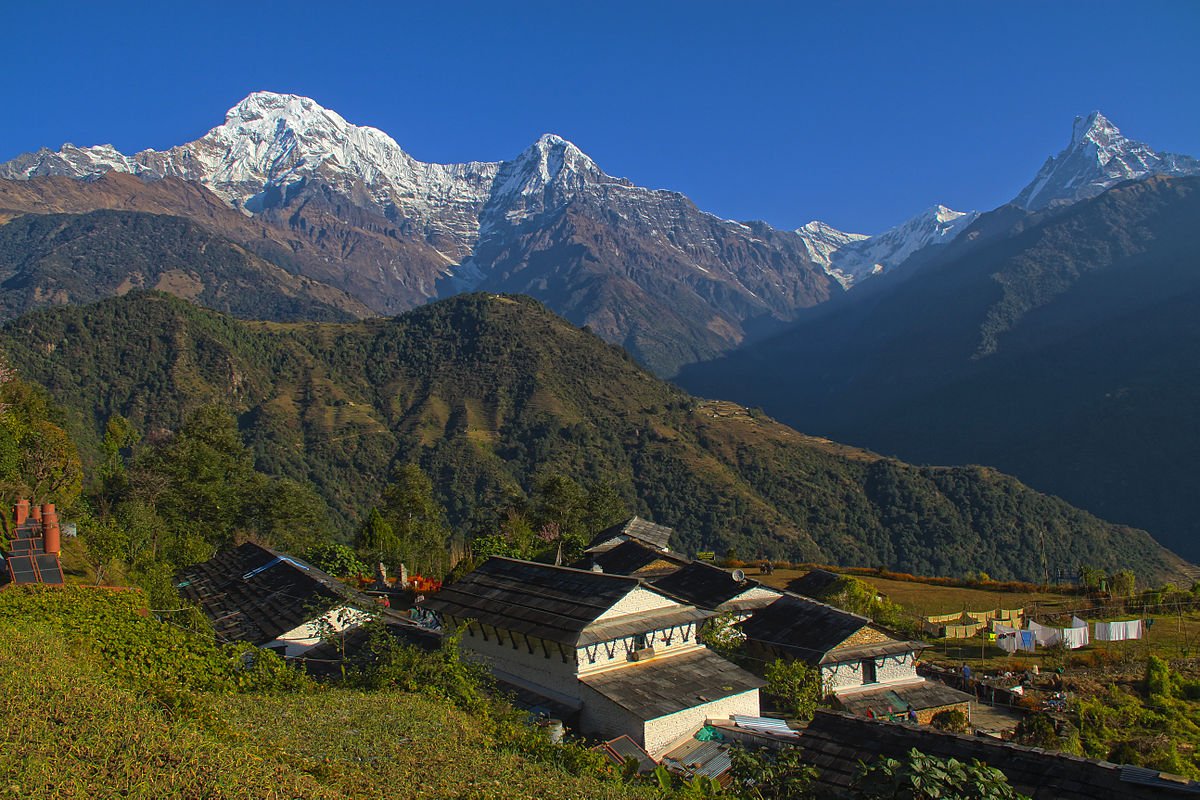 Mt. Annapurna (8091m) is the 10th highest mountain in the world and the journey to its base camp is believed to be one of the most popular treks on earth. Like any other trip in the Annapurna region, our trek also begins in Pokhara, widely known as the ‘Lake City’ and passes through cascading waterfalls, beautiful villages, terraced farmlands, lush rhododendron forests, and amazing mountain vistas. Ghandruk, a small village in Nepal, located about 2012 m above the sea level in the Kaski district of Gandaki zone, is one of the best destinations for trekking lovers.

Ghandruk village lies at the foot of the Annapurna region. This trek offers a majestic view of mountains like Hiuchuli, Annapurna mountain range, Lamjung Himal, Gangapurna, Nilgiri, and Machhapuchhre. It will be an enchanting experience to be surrounded by spectacular mountain views.

Most beautiful place in Nepal Ghandruk village is a Gurung village. There a Gurung museum when you can learn more about Ghandruk village. If you’ve never seen a village marketplace then you can visit Seuli Bazar. It is a traditional village which has it’s own art and culture, lifestyle. Ghandruk is the local residence of people of different descent, mostly Gurungs. You can see traditional stoned steep, two-story buildings made of stone. You will get an insight into the culture, lifestyle, food, clothes, etc. People still live in their traditional homes and follow many of their traditional rituals and customs preserving them even till now. If you happen to go there at the time of their festivals, you will get a chance to see their cultural dances, varieties of foods, cultural dress, and jewelry. You can experience their indigenous hospitality and homely environment.

Ghandruk is the trekking trail to Annapurna Base Camp, Poonhill, Mustang, Lamjung, etc. The Annapurna Conservation Area covers world’s deepest river Kali Gandaki, various species of flowers, animals, birds, amphibians, etc. While trekking, your eyes will be treated with some exquisite flora and fauna including rhododendron, green forest, flat farm landscapes, bridge, lakes, caves, Buddhist temples and snow-capped mountains. You will get a closer look at the stunning views of mother nature which you would not want to miss. It will be a fresh breath of air for those living busy city lives.

The average temperature of Ghandruk is around 17 degrees Celsius during January to May. Most people prefer to visit during this season. During June and July temperature varies from 17 to 33 degrees Celsius, September and December is quite cold.

Ghandruk trek is probably the shortest trek in Annapurna region and the easiest too. So, the trek is suitable for people of different ages. While in other treks, you might get altitude sickness and get tired soon but you won’t feel uneasy and fatigue in Ghandruk trek. You can walk easily for hours and observe the natural beauty while trekking.

Upon arrival at the Tribhuwan International Airport in Kathmandu, company representative will be on standby with our vehicle & a sign-board plaque displaying our your name & company’s name at the Airport to pick you up and transfer you to your Hotel. After you’ve freshen up, a senior executive from the office will give you a short briefing about your whole program. Get familiar with your surroundings, rest or take a short stroll down the road. Your first overnight at your hotel in the valley of the gods.
Overnight at hotel in Kathmandu.

After breakfast in hotel, Half day sightseeing:

Swayambhunath is an ancient religious complex atop a hill in the Kathmandu Valley, west of Kathmandu city. It is also known as the Monkey Temple as there are holy monkeys living in the north-west parts of the temple.Swayambhunath occupies a central position, it is probably the most sacred among Buddhist pilgrimage sites. The Swayambhunath complex consists of a stupa, a variety of shrines and temples, some dating back to the Licchavi period. Although the site is considered Buddhist, the place is revered by both Buddhists and Hindus. Numerous king Hindu followers are known to have paid their homage to the temple, including Pratap Malla, the powerful king of Kathmandu.

Boudhanath Stupa (or Bodnath Stupa) is the largest stupa in Nepal and the holiest Tibetan Buddhist temple outside Tibet. It is the center of Tibetan culture in Kathmandu and rich in Buddhist symbolism. The stupa is located in the town of Boudha, on the eastern outskirts of Kathmandu. The stupa consists of a dome at the base, above which is a cubical structure painted with eyes of Buddha looking in all four directions with the word “unity” in the main Nepali dialect between them. There are pentagonal Toran present above each of the four sides with statues engraved in them. Behind and above the torana there are thirteen tiers. Above all the tiers there is a small space above which the Gajur is present. The stupa has many artifacts inside it.

Pashupatinath Temple, with its astonishing architectural beauty, stands as a symbol of faith, religion, culture and tradition. Regarded as the most sacred temple of Hindu Lord Shiva in the world, Pashupatinath Temple’s existence dates back to 400 A.D. The richly-ornamented pagoda houses the sacred linga or phallic symbol of Lord Shiva. Thousands of pilgrims from all over the world come to pay homage to this temple, that is also known as ‘The Temple of Living Beings’.

Kathmandu Durbar Square or Hanumandhoka Durbar Square is the plaza in front of the old royal palace of the Kathmandu Kingdom. It is one of three Durbar (royal palace) Squares in the Kathmandu Valley in Nepal, all of which are UNESCO World Heritage Sites . Hanuman Dhoka (Hanuman Gate), with several complexes spread over an area of about five acres, is the social, religious and urban focal point of Kathmandu. The square is the complex of palaces, courtyards and temples that were built between the 12th and the 18th centuries by the ancient Malla Kings of Nepal. The Durbar is divided into two courtyards, the outer comprising Kasthamandap, Kumari Ghar, and Shiva-Parvati Temple, and the inner consisting of Hanuman Dhoka and the main palace. It also houses two museums. Important ceremonies, including the coronation of the Nepali monarch, are held in the Kathmandu Durbar Square.

Depart from Kathmandu to Pokhara. (Drive/Fly)
Passing through beautiful landscape, paddy farm, river, tiny villages etc. Pokhara is located 200 kilometer west of Kathmandu city .This is second largest city of Nepal. It is a most beautiful city with lakes and panoramic view of Annapurna Himalayan ranges. The Annapurnas and the famous “Fishtail” mountain peak of Machapuchare can be seen from Pokhara valley.

Pokhara: Arrival
Pokhara is blessed with stunning panoramic views of the Annapurna range which forms its backdrop. The mesmerizing Machhapuchhre also called Mt. Fishtail dominates the scenery because of its proximity to the valley and can be seen from anywhere in Pokhara. Stretching from east to west, the Annapurna massif includes Annapurna 1 to IV and Annapurna South. Further away are seen the giants, Dhaulagiri (8,167m) and Manaslu (8,163m). Overnight at hotel in Pokhara.

This is a beautiful shortest trekking you can do in Annapurna region, the trek is easy and much romantic walking through the beautiful villages. Ghandruk trek is a short trekking in Nepal but probably the best mix cultural trek in Annapurna region. There are no other routes which have this much natural diversity & cultural variety.It offers you a magnificent views of annapurna range as well as massive dhaulagiri. Walking along this ridge gives fantastic views of Annapurnas, Manaslu.

Day 05: Trek back from Ghandruk to Pokhara.

A steady climbing down past startling green cultivated land and picturesque, beautifully preserved farms to the scurrying Modi River, which the trail follow back to Birenthanti and Nyapul. Drive back to pokhara. Transfer to the hotel.

Day 06: Drive/Fly back to Kathmandu

After fantastic time in and around Pokhara, today after breakfast you will transfer to the tourist bus station for day scenic countryside drive to Kathmandu. Stay overnight at the hotel.

Note: You can fly to Pokhara which takes 35 minute.
Overnight at hotel in Kathmandu.

After breakfast, transfer to airport for final departure.