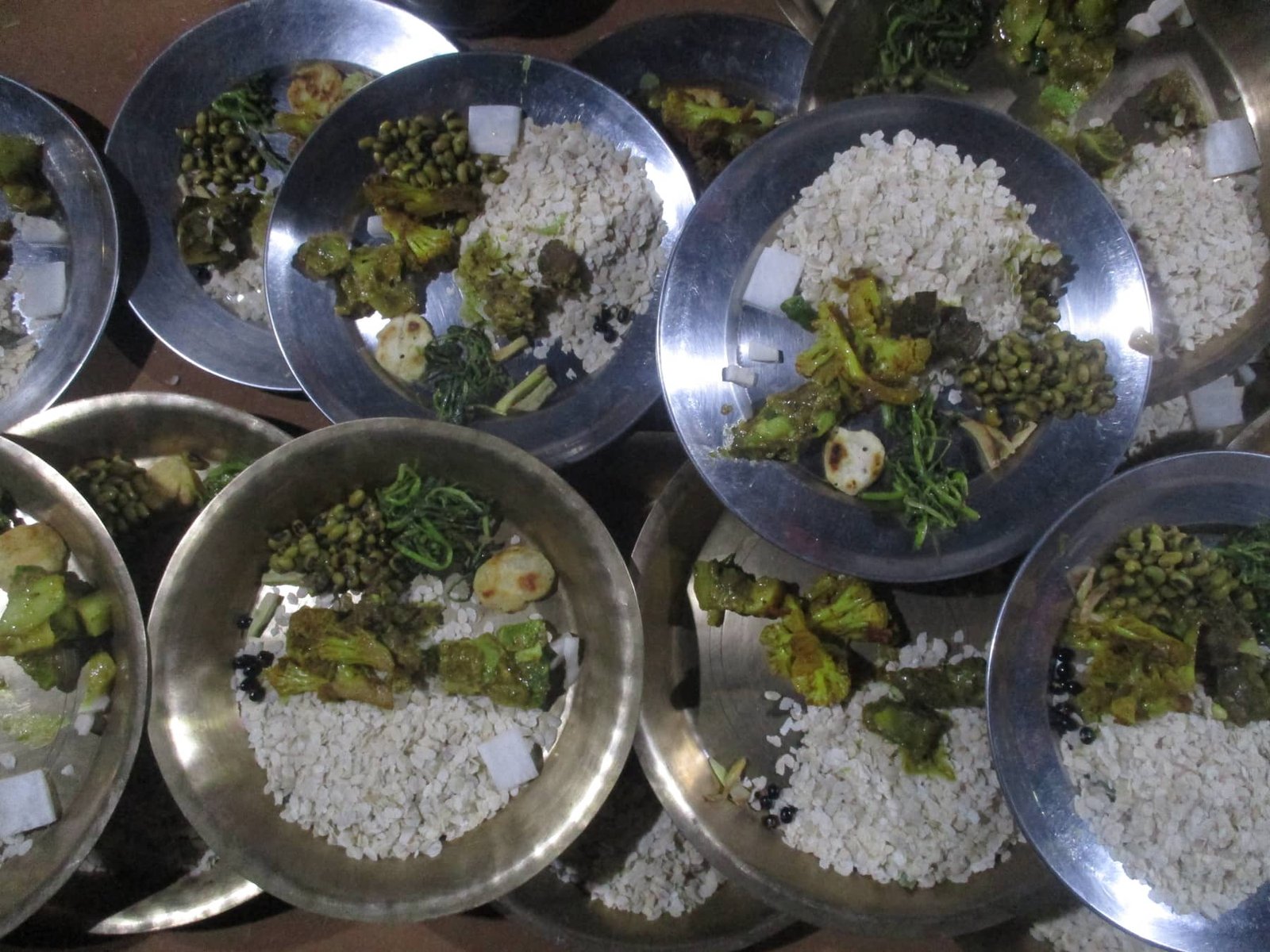 Newa community is also popular for their festivals, feasts and a immense variety of cuisines in occasions like Dashain, Yomari puni, Pachare, Rato Machindranat jatra, Biska jatra and many more. Food is not only tasty but it is also healthy diet and it is scientifically proved that Newa bhowe (feasts) items in proper ratio for health. Newa Cuisine consists of non-vegetarian and vegetarian food items. Newa Cuisine means non-vegetarian items because Newa people are non-vegetarian people but there are few vegetarian people also but the number is very less. Mostly Newa people eat buffalo meat and it is predominant in Newari Cuisine. Alcoholic beverages like Aila and Thwo is popular. Aila means alcohol and according to the research Newa alcohol is among one of the best in the world. Thwo means rice beer which is white in color.

Baji (Beaten Rice): It is taken during feasts or for lunch with other items. It might be little herd for old people to chew who has less teeth but you can take with soup which makes beaten rice soft. For example with dakula ti (meat soup/masuko jhol).

Bara: You can find bara as donuts with hole in the middle as in donuts. We can say it lentil based fried donuts. It is normally made without meat.

Wo: It is lentil based flattened spicy and salty cake which is not as thick as a cake in shape. It looks as a small flattened plate. Wo is vegetarian food but you can also find non-vegetarian wo, where you’ll find minced meat or egg or both at the middle of wo as in burger. Wo is a healthy food. Some prefer having with a variety of toppings like kachila.

Bhuti: It is black-eyed peas which is boiled and mixed with chilli-powder, oil and salt.

Jaa (Boiled Rice): Rice is main food of Newa people. It is taken twice in a day in the morning as breakfast and at the dinner

Phashi: It means pumpkins and it is one of the item during feasts.

Waaunchha: It is greens, a compulsory item during feasts. It is boiled and mixed with chilli-powder, oil and salt. It is an easy Newari recipe.

Yomari: Yomari is made during Yomari puni occasion and it is a steamed sweet stuffed with molasses.

Bhutan: It is made from intestines and internal organs of a buffalo, hen, duck, goat. After washing properly with water it is boiled and then fried in oil. It is tasty and will be best to eat with alcohol or other food items like beaten rice etc.

Choila: Choila Newari dish is roasted and marinated buffalo meat. It is mixed with garlic, ginger, chilly and mustard oil which is spicy. It is made from buffalo meat which is best in any occasion, feasts, breakfast, lunch, dinner and with alcoholic beverages. Proper proportion of garlic adds taste in this food item. It is popular not only among Newa people but it is popular among all Nepalese.

Dukula: Goat meat is also one of the popular food item in Newa community. Mostly goat meat is prepared during Dashain, bartabanda etc. Some Newa people doesn’t like smell of goat meat but if you take it few times then later you’ll prefer goat meat with smell.

Henyla: It’s duck meat which is tasty when cooked well with lots of ginger pieces.

Kachila: It is marinated raw minced meat which is taken without cooking. You’ll find two types of kachila one is minced and other is in small pieces. It is tasty when taken with bara, wo, aila or thwo.

Khayula: Chicken meat is known as khayula. There is not much Newa varieties as compared to buffalo meat items.

Mana choila: Choila and Mana-choila sounds similar but it taste different. Mana-choila is boiled and mixed with spices.

Myae: Tongue of a buffalo, usually fried but it is also boiled and mixed with mana-choila.

Samaya Baji: It is beaten rice, choila, samaya (Rice Pops), Sannya which is known as Anchovies in English, palu (small pieces of ginger) and black soybean.

Sannyakhuna: Jelly of cooked and cooled buffalo meat soup mixed with fish name sannhya (Anchovies). It is soup only without meat pieces. It is hot, spicy and tasty best to eat anytime except when you’re suffering from common cold and cough. You can find this food item only during winter. It just like jelly chocolate.

Sapu Mhicha: If you see this then you may not feel like eating this but it’s tasty and will have later again if you have this once. It is tripe stuffed with bone marrow.

Soh: Fried lungs of goat is known as soh.

Takha: It is jelly of cooked and cooled buffalo soup with more meat pieces than soup. This food item is popular during winter guthi bhoj (guthi feasts) etc.

Aila: It is alcohol which is made locally at home but these days new generation doesn’t have idea of making alcohol at home. Home made aila is one of the best alcohol in the world. It is usually color less alcohol but color can be added using different natural ingredients and high quality aila is very strong. You can feel it in lungs and stomach after you drink it. There are different grades of aila for normal alcohol it is called aila and for best quality it is called mushau-aila.

Thwo: It is rice beer made at home normally white in color. You can also find hyau-thow means red rice beer just like Fanta. There are different varieties of rice beer. You’ll find sweet to sour in taste. Sweet thwo is popular among girls and kids. Sweet thwo is also given to a girl/women who has given birth to a child. Sour thwo is popular among boys as it is strong as alcohol.

Bulla or Kamowh: It is remaining rice particle after making thwo. Water, steamed rice and other ingredients are mixed to make thwo. Liquid is taken as thwo and reaming rice particle is boiled, mixed with buffalo bones with meat and taken as soup. It is also best with beaten rice as it means beaten rice soft.

Gorma: It is very tasty thick soup made from rice flour. Dried goat meat can be mixed for better taste but some people also prefer to take without mixing meat. In my community remaining goat meat of dashain is dried and mixed in gorma in Tihar during mhapuja and kijapuja (bhaitika). It might be different from place to place.

Kwaati: A country bean soup healthy and tasty which is made during Gaijatra festival. There will be at least with nine different beans which is soaked in water for few days.

Lai Kwa: It is made from dry reddish. It is a tasty soup.

Mee kwa: It is known as methi in Nepali language and Fenugreek in English language. It is boiled mixed with spices and taken as soup. To remove bitter taste from you can boil it and trow boiled water. Fenugreek is also good for health and it is said that it is not good for people having low blood pressure as it lowers blood pressure.

Paun: It is sour soup which is made from lapsi and is in liquid form which is taken as a soup. It is taken when it gets cold because hot paun is not tasty. Lapsi is boiled and is mixed with chilly powder and salt. Lapsi English name is Nepalese Hog Plum. It can be taken as vegetarian soup or boiled meat water (soup) can also be mixed for taste.

Lakhamari: It is made with flour and sugar. It was popular in those days when there was no culture of modern biscuits. Today it is not much popular for consumption but used in various occasions like wedding ceremony etc.